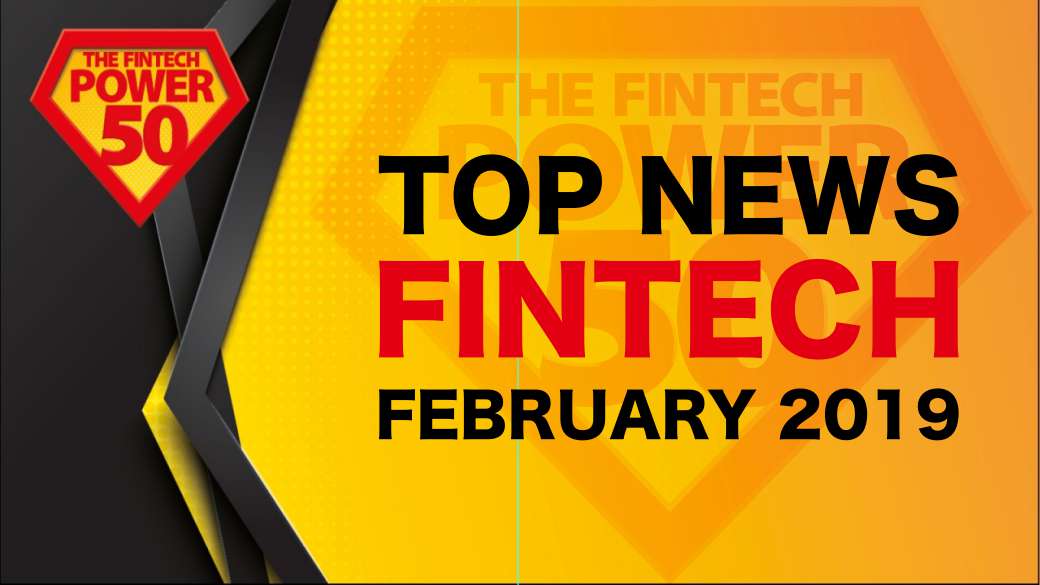 Fintech has been one of the most commonly debated tech topics in the financial services industry for years now, especially since the PSD2 regulation came into play in the UK back in January 2018.

We invite you to check out our monthly top fintech news series featuring the lates news, announcements, reports and insights on open banking and PSD2, paytech and digital payments, regtech and KYC / AML, blockchain and cryptocurrency.

Meanwhile, you will find below our selection of 40+ fintech news February 2019.

OBIE publishes Open Data Service Quality Indicators
These indicators are one of the measures required by the Competition and Markets Authority (CMA) following its investigation into the UK retail banking market. This data is published every 6 months and ultimately enables people to compare service levels provided by banks. source: open banking.org.uk

Does open banking have a messaging problem?
Issues with stricter authentication and a raft of mixed messages have been blamed for holding back the open banking revolution, so what can be done?
source: computerworlduk.com

The Invisible Threat to Open Banking: Why SCA Regulations Need an Overhaul
While the promise of Open Banking remains enormous, and innovation continues to expand into its second year, Strong Consumer Authentication (SCA) standards hang ominously in the distance, threatening to unravel all the good work that Open Banking has put in place to date.
source: cbronline.com

RBS chair has open questions about open banking
The FSB also warns that cross-subsidisation may allow Big Tech firms to gain market share rapidly and knock out existing providers. As a result, “their participation may not result in a more competitive market over the longer term.”
source: fnlondon.com

Customers Don’t Care About Open Banking
In the same way customers don’t care about the electricity provider every time they plug an electronic device in a power socket. The only expectation is that it should work.
source: cgi-group.co.uk

Stripe leads $40m funding round in paytech Rapyd
Rapyd reckons there is a market opportunity as more than half of all transactions worldwide are facilitated via bank transfer, but merchants find it “increasingly difficult to digitally enable local payment methods and process cross-border sales”.
source: banking tech.com

Self-pay tech ‘could hit retailer profitability
Checkpoint Systems, ECR Community Shrinkage and On-Shelf Availability Group analysed data from 13 retail companies based in the US and Europe and two suppliers of SCO technologies, revealing that a greater use of SCO technologies resulted in higher rates of retail loss.
source: retail-systems.com

PayPal CEO predicts digital payments industry will mature into a $100 trillion market
“P2P, or peer-to-peer payments, is exploding in the market. It’s a multi-hundred-billion-dollar marketplace. This will definitely not be a winner take all.”
source: CNBC.com

“Meet The Female Titans of RegTech” Dr. Sian Lewin From RegTech Associates & Breana Patel
There is a huge cultural gap between large financial institutions and small, nimble RegTech companies. Ultimately, the success of onboarding a RegTech will require accommodations from the firms on both sides of the transaction.
source: medium.com

Is RegTech The Answer To Corporate Governance And Risk Management Issues?
Despite its advantages, RegTech is not the solution to all corporate governance and risk management issues. First, it is not easily accessible—the significant barriers to access of RegTech include financial resources, access to data and talented manpower.
source: Forbes.com

Merging RegTech and Identity
As regulations continue to develop, especially the 5MLD, Regtech will play an increasingly important role for those companies wishing to streamline their processes, bring on customers more efficiently and also avoid fines for non-compliance.
source: finextra.com

The swift climb of regtech: How technology is transforming regulatory compliance
The disruption of banks and financial services is a well-known phenomenon. Players who sustain this, however, will be those who get the regtech aspect right. With the wider implementation of regtech solutions, instances of massive write-offs and expensive lawsuits for compliance-related oversight by financial institutions are likely to get less dramatic.
source: your story.com

We’re going to see the emergence of RegTech as an industry: PayPal CTO
Sri Shivananda, SVP and CTO of PayPal talks about what’s driving the digital payments space, security challenges, and why RegTech is the next big thing in the game.
source: pcworld.idg.com

Swift expands KYC registry to corporates
According to the global payments network, its KYC registry will be open to all 2,000 Swift-connected corporate groups from Q4 2019. They will be able to use the registry to upload, maintain and share know your customer information with their banks.
source: gtreview.com

Fintech in India: Some Key Regulatory Features
The fintech space in India has undergone massive changes in the last few years on account of significant policy decisions in India – from the demonetization exercise in November 2016 to the rapid changes in the laws of privacy, as well a range of other proposed policy\changes by the financial regulator of India, the Reserve Bank of India (RBI).
source: iflr1000.com

JPMorgan’s digital currency runs on a private blockchain — here’s what makes it different from public blockchains
Private blockchains are popular with companies that conduct and log in-house transactions and are said to improve supply-chain transparency and efficiency in fields such as finance, health care and manufacturing. Furthermore they have the ability to be customized.
source: market watch.com

Google Enters Crypto and Blockchain Search Business With New Tools
A new raft of crypto and blockchain analytics tools has just been launched by search giant Google. They will provide deep data sets for the top cryptocurrencies and aim to revolutionize blockchain search as the company did for information on the internet.
source: newsbtc.com

Mark Zuckerberg is ‘potentially interested’ in putting Facebook login on the blockchain
In particular, Zuckerberg said the blockchain could give users unique powers when granting data access to third-party apps.
source: theverge.com

Canada: Blockchain Association Merges with Chamber of Digital Commerce
“Canada’s blockchain leaders and government would like to see a strong and coordinated blockchain ecosystem that is ready and able to effectively collaborate with policymakers to ensure the industry in Canada will thrive.”
source: cointelegraph.com

THERE’S NO GOOD REASON TO TRUST BLOCKCHAIN TECHNOLOGY
To answer the question of whether the blockchain is needed, ask yourself: Does the blockchain change the system of trust in any meaningful way, or just shift it around? Does it just try to replace trust with verification? Does it strengthen existing trust relationships, or try to go against them?
source: wired.com

Once hailed as unhackable, blockchains are now getting hacked
Susceptibility to 51% attacks is inherent to most cryptocurrencies. That’s because most are based on blockchains that use proof of work as their protocol for verifying transactions.
source: technologyreview.com

Is Blockchain Technology Overhyped?
Werbach is fond of invoking a “governance paradox” that he attributes to the economic sociologist Vili Lehdonvirta: The very mechanisms needed to make a decentralized system like blockchain desirable — namely, apparatuses of oversight and regulation — appear to make the system no longer decentralized.
source: nytimes.com

Blockpass to deliver commercial KYC Blockchain Validation for British Fintech ethecal
“Blockpass is excited for our partnership with ethecal to become a reality. This collaboration builds upon the remarkable momentum we have made in bringing blockchain identity verification to the market for commercial use,” said Blockpass CEO, Adam Vaziri
source: blockpass.org

Binance CEO: Crypto Cheaper, Faster & Easier Than Legacy Digital Payments
While cryptocurrencies have yet to see monumental levels of adoption on Internet portals/stores, this facet of this budding industry has already garnered some semblance of backing.
source: newsbtc.com

RegTech Heliocor partners with crypto platform CBX
The collaboration, according to Helicor, aims to enhance investor engagement with cryptocurrencies. Dokstor, the flagship product of Heliocor is a fully GDPR compliant cross-regulation onboarding that is fully integrated with the CBX trading platform.
source: ibsintelligence.com

Ernst & Young Introduces Tax Tool for Reporting Cryptocurrencies
The new tool called EY Crypto-Asset Accounting and Tax (CAAT) is designed to improve accounting and tax calculations for digital currency transactions by both institutional customers that have cryptocurrency on their balance sheets and individuals who trade crypto assets on a smaller scale.
source: cointelegraph.com

Blow To Bitcoin And Crypto As Asset Manager Makes ‘Bubble’ Warning
Matt Hougan, global head of research at the creator of the world’s first cryptocurrency index fund provider, Bitwise Asset Management, has warned that the bitcoin bubble has burst and 95% of the 2,000 cryptocurrencies that exist today will “die a painful and deserved death.”
source: forbes.com

When will the next cryptocurrency bull run occur? 8 expert opinions
Chinese Bitcoin billionaire Lao Ge doesn’t know when this bull run will end either, but one thing he knows for sure is that ‘the next bull run will be 10 times bigger than the last peak we have seen’.
source: chepicap.com

Busting Myths About Cryptocurrency Custody
The discussion usually centers on “hot” versus “cold”—meaning, online versus offline—storage of private keys, which are the private codes that allow you to transfer crypto assets. Let’s address these misconceptions, one by one.
source: fortune.com

Japanese “Amazon” Rakuten May Soon Accept Cryptocurrency
The report contains information about updates to the company’s prepaid card service Rakuten Edy, which includes implementation of QR code scanning for payments–another indication that cryptocurrency integration may be coming in the near future.
source: ethereumworldnews.com

What do you think of our selection of top fintech news February 2019? The Fintech Power 50 team invite you to CONTACT US if you believe we missed any important news involving you or your company!