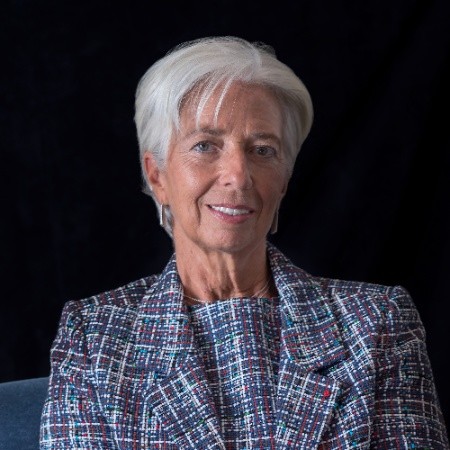 Christine Lagarde is the eleventh Managing Director of the 189-nation IMF, and the first woman to hold that position. She was selected by the IMF’s Executive Board to lead the institution on July 5, 2011 and re-selected to serve a second five-year term starting on July 5, 2016.

Under Christine Lagarde’s leadership, the IMF has helped its member countries to overcome the global financial crisis; strengthened its support in key areas of lending, economic policy advice, and capacity building; and achieved significant reforms in its governance to give greater voice to emerging markets and better reflect the dynamic changes in the global economy. She has also expanded the work of the IMF into macro-economically critical areas such as inequality, gender, and the environment.

After being admitted as a lawyer to the Paris Bar, she joined the international law firm of Baker & McKenzie as an associate, specializing in Labor, Anti-trust, and Mergers & Acquisitions. A member of the Executive Committee in 1995, Christine Lagarde rose to Chairman of the Global Executive Committee of Baker & McKenzie in 1999, and later Chairman of the Global Strategic Committee in 2004.

She joined the French government in June 2005 as Minister for Foreign Trade. After a brief stint as Minister for Agriculture and Fisheries, in June 2007 she became the first woman to hold the post of Finance and Economy Minister of a G-7 country. From July to December 2008, she also chaired the ECOFIN Council. As Chairman of the G-20 when France took over its presidency for the year 2011, she set in motion a wide-ranging work agenda on the reform of the international monetary system.

She was named Officier in the Légion d’honneur in April 2012.

A former member of the French national team for synchronized swimming, Christine Lagarde is the mother of two sons.